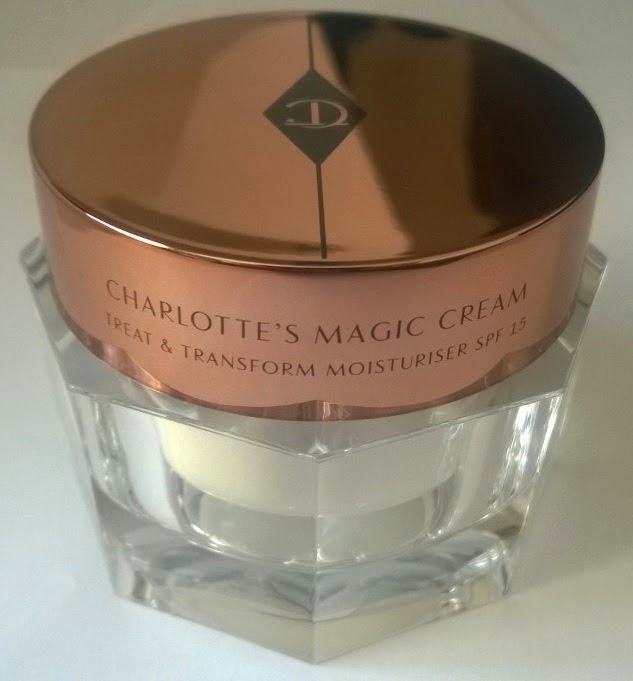 When it was announced that Charlotte Tilbury's makeup and skincare was going on sale here in Ireland, I knew inside of a nano-second what product I would get (from my very long CT wish list :-)).  It was this, the Moisturiser Known As Magic Cream.  I'd read a lot about it and had seen her use it in her videos and the more research I did, the more I knew I wanted to try it (as I wasn't in a position to get a sample of it first to try out, and given that it's not inexpensive, I wanted to be as sure as I could before shelling out).  I have a few bits and pieces of Charlotte Tilbury makeup already and was impressed with them so I had high hopes for this.


For over 20yrs, Charlotte Tilbury has been mixing her own moisturiser and using it backstage at fashion shows, fashion shoots and with her clients, and this moisturiser started to be known as "Charlotte's Magic Cream".  Its reputation was such that when it was announced that she was launching her own makeup range, the big news was that she was also going to include this "magic cream".

Forgetting the hype for a minute, is it any good, in reality?


Yes it is.  It's very good.  In fact, it's absolutely gorgeous.  This is a super rich, thick and creamy moisturiser.  It glides really easily onto your skin (if you prefer the texture of your moisturiser to be lighter and more fluid-like, then you may not like the feel of this, but for me and my skin, I love it).


This is jam packed full of goodies such as hyaluronic acid, wild pansy, rose hip oil, camilla oil, vitamins A, C and E, glycerin, shea butter, and a bunch of other seed and flower extracts.  Silicones do make a (minor) appearance, I'd rather if they didn't, but it's the only bum note (in my opinion) in what is a really great ingredients' listing.

To describe it by its full name, "treat and transform cream" is, in my opinion, spot on.  The fantastic ingredients combine to treat your skin but also works to transform a tired/hangover/knackered/stressed out skin.  If your skin, for whatever reason, lacks radiance, then this product will put it back, in spades;  this is radiance in a pot.  Also, the results are immediate.  When I saw you "glow", it's not in a greasy way but in a healthy, radiant, hydrated, plumped-up, youthful kind of way.  It also makes a brilliant base for makeup.  I tried several different foundations over it and they all looked great.  Although I can't vouch for it, I can imagine that this might well work for almost all skin types except perhaps if you're very oily (it's so rich and contains so many oils that it may be too much for you).  I don't see why you couldn't use this cream as a day and night cream, but I think I'm personally going to use it primarily as a day cream because I love the glow.


The 50ml pot of this genuinely Magic Cream set me back €90, and while it's not the cheapest, it's by no means the most expensive on the market either, not by a long shot (case-in-point:  it works out at €1.80/ml compared with about €4.50/ml for Siobhán's favourite, Creme de la Mer, not that this is a competition, just as a point of comparison ;-))  This cream impressed me right from the get-go.  My skin (normal veering towards dry, and sensitive) has lapped up Ms.T's Magic Cream.  Although this is a "first impressions" post, based on about a weeks' usage, I can see a long and happy future with this in my skincare regime.  Highly recommended.

Until next Monday,
MontyC
Email ThisBlogThis!Share to TwitterShare to FacebookShare to Pinterest
Labels: skincare