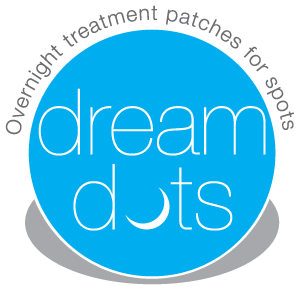 Quick review post on something I discovered popped into my postbox a couple of weeks' back... Dream Dots.  I wasn't convinced they weren't a bit of a gimmick, and I also was pretty certain I wasn't the target demographic, but as luck (more like misfortune!) would have it, I got the full-on 'flu, and had one or two breakouts as a result.  So I thought, instead of finding someone else to try these out, I'd give them a whirl myself.

These are teeny tiny little miniscule cushioned micro-plasters (are you getting it?!  They're small!) that you place on top of a spot.  A forming one, an already existing one, a dying one.  Whatever.  And they kill it. Dead.  Over a night or a couple of nights.  And they work.  They seriously work.  Not a gimmick at all.


I rarely get spots.  I'm at that age when I rarely do.  In fairness, I'd have loved these when I was a teenager and I suffered from more than just the occasional breakout.  But better late than never.

So, aside from trialling these over a few days, I also started to research how they came about, and spoke with the founder, the lovely Donna Ledwidge, a 29 year old beauty guru, designer and entrepreneur from our very own Wicklow in Ireland.  I always love the story behind a thing, and I'm going to share it with you, with Donna's permission.  Because I think stories are more interesting than the end result (although the end result in this case is pretty impressive too, more on that below).


DreamDots was born out of a conversation apparently Donna had with her friend, a nurse involved in the treatment and management of chronic wounds.  Suffering from various bad skin problems at the time, her friend was explaining how she used to cut up larger body patches (designed for major wounds) and use them on her own breakouts.  Intrigued, Donna asked her to send some of the patches from the US and when she saw how good they worked, she spotted (no pun intended!) an opportunity and immediately contacted the manufacturer of the patches, and worked with them for over a year on formulating a smaller version designed for spots.

So how does it work?  It looks like a mini blister plaster, containing a central area which absorbs the exudate (the technical term for all the bacteria and puss and general spot-related yucky stuff) in the inflamed pore, and that then locks that yuckiness in, so that it can't sit there and reinfect your skin, and that would also however create a sealed moist healing environment underneath the patch.  Donna explained to me that a moist (versus a dry) wound environment is now known to be better in general for healing (for various scientific reasons I'm not getting into here), and that this moist healing action means localised pain is significantly reduced and redness also decreased  I can absolutely attest to that.

The end result: a patch, a class 2M medical device, CE and FDA approved, with no less than three worldwide patents lodged for it.  I was so impressed to hear this story, along with the efficacy of the patch itself, I had to post about it.

Genuinely, this is a bit of a miracle.  Designed to be used overnight (so it has time to work its magic over six to nine hours), you simply peal one off, place it on the spot, step the hell away from it, so you're not tempted to squish and squeeze, go to sleep, and wake up with the spot either (a) gone completely - as was the case for one spot and (b) gone after two successive nights' usage, in the case of another.

The patches themselves are small, comfortable to wear, the adhesive is sufficient to the task of lasting the six to nine hours, most importantly for me, hasn't given me any localised allergic reactions (I react badly to the adhesive in pretty much all plasters, micropore etc).   I've even tried adding makeup over it and managed to almost fully camouflage it.  You don't feel them on, they're lightweight and move with your skin.  They calm down irritation (a major plus when you have a particularly sore bump) and you can see the proof when you wake up - the exudate is drawn into the plaster and locked there, so when you remove it, the yuck is gone too.  I don't have before-and-after pictures, but if you look on their site (look here) there are some examples.

DreamDots are now, a year on, available nationwide in most pharmacies all over Ireland.  They also ship (for free) worldwide from their site, a simple-to-navigate website which also explains spots, what they are, how they form, and how the DreamDots work.  It's worth having a look at their facebook page too, as they run frequent offers and giveaways.  These are a definite good idea to have in your bathroom cabinet, or medicine cabinet, or your makeup kit.  Highly, highly recommended.  These.  Really.  Work.  A PR sample, in the interest of transparency, but one I will be replacing when I've used 'em all up.
Email ThisBlogThis!Share to TwitterShare to FacebookShare to Pinterest
Labels: skincare