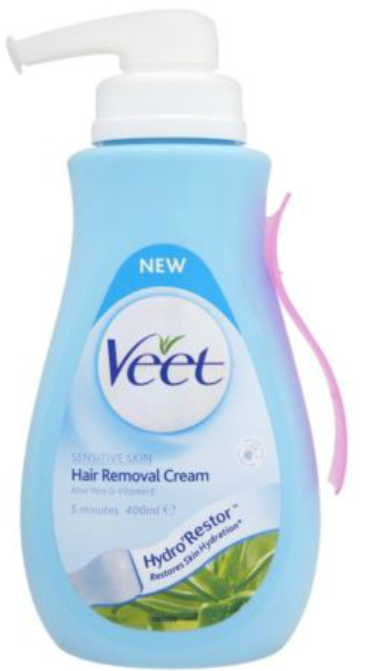 Dear god this stuff is beyond appallingly bad awful.  Ususally costing around the €16 mark I noticed this on sale for under a tenner, so I handed over the €9, collected my points, brought it home, and didn't use it for about a month (forgot about it, actually).  Took it out this morning and in the interest of experimentation, used it on my legs, thinking, how bad can this stuff be....

So.  I have a spotted history with hair removal methods.  My teenage years were spent in depilatory-cream-land.  Along with all of my friends, we ignored the stink and told ourselves this was a Great Way of Removing Unwanted Hair.  Onwards, to the height of sophistication, or so I thought at the time, my twenties saw me using a cordless electric razor (or buzzbuzzer, as I always called it.  Don't ask me why).  Then there were the waxing years.  On a very absolute recommendation of a friend of mine at the time that regular waxing would eventually lead to zero hair growth, each month I'd try to time my waxing sessions to make sure they didn't coincide with a certain time of the month (you ladies know what I'm talking about).  But for all that, ouch, ouch, ouch.  Not cheap, slightly messy, and leaving you with dirty wax marks on your legs for a day before you could shower again.

After years, I figured, holy crap, there can't be anything worse than waxing, and around about the same time, my financial situation changed considerably, and I couldn't afford my regular (waxing, facial, manicure etc) sessions and decided to invest in home-equivalents.  I was wrong.  Oh I was so wrong.  Epilation is by far the most excruciating thing I believe one can do willingly to themselves.  Way worse than waxing.  Way way worse.  But it was what was affordable, so I stuck with it.  Fast-forward a few years and I decided the hell with this, I would go back to shaving.  Maybe I was just getting too old for masochism!  On the other hand, the years of waxing and epilation had left me far less hirsute anyhow, I had found that regrowth was patchy and less coarse than my earlier years and a shave every few days would be just fine.

So when I saw this, it transported me back in time, oh so many years ago, to using this stuff as a young impressionable teenager.  And I figured, rush of sh*t to the brain and all aside, sure why not give it another go.

This particular one is formulated for sensitive skin, grand says I, this is me to a tee.  Being slightly impulsive, and not wanting to do the patch test 24 hours beforehand, I just went for it.  Whacked it on with abandon on one leg, and set the timer for five minutes per instructions.  Five minutes later, no dice, no movement of hair.  You can keep this on for up to ten minutes according to the details on the side of the bottle.  So every additional minute I tried again on another patch.  When the full ten minutes were up, and in accordance with the strict admonishment to categorically not leave it on for a second longer than that, I used the spatula to remove the hair.  And remove it it did.  "The" hair.  Or maybe "the" hair here and "the" hair there.  Certainly not "all of the" hair.  Sighing, I rinsed it off, only to discover that it had removed maybe around 50% of the hair (if I'm being very generous).  So out came the trusty razor to remove the rest.

Onward to leg number two, this time I left it the full ten minutes, and applied it somewhat more thickly.  Once the timer went bing!, I thought surely it had worked this time.  Nope, same result.  Now here's the thing, I was faffing about a bit and likely it was on about a minute more than the ten minute limit.  There's a reason that you're warned to remove it after ten minutes.  At the eleven minute mark it started to sting.  Barely imperceptibly, but noticeable nonetheless.  Not quite panicking, and remembering from the fog of my recollection one of the main reasons I stopped using this stuff (after a nasty chemical burn all those years ago from leaving it on too long), I rinsed it off quickly, only to discover that the extra minute hadn't made any difference either - still around 50-ish-percent of hair gone, with the rest needing removal by the razor.

P*ss poor is the only thing I can say about this.  Oh, and messy, and time consuming, and oh dear god it stinks, how I'd forgotton how much this stuff stinks.  Generally, when something doesn't work for me I'm happy to pass it on to someone else to see if they can get some usage out of it - waste not, want not.  In this instance, it's going straight into the bin.  I wouldn't burden someone else with having to throw it out!  Rarely have I found that a product is as bad as this.  I honestly couldn't recommend to my worst enemy (I don't believe I have any, but if I did...)

One other thing - the leg that had it left on for that extra innocuous sixty seconds?  It's itching and very slightly pinker than the other.  So take that warning on the side of the bottle seriously folks.

Buy a razor, use a tiny smidge of your hair conditioner in lieu of expensive shaving foams/mousses (which are full of alcohol and very drying) and you're on the ball.  Or stick with waxing, if you can handle it (I can't).  Or if you can afford the expense, have it all laser'd-away (I had my underarms done, it really is very effective).  But dear god, run screaming from this stuff before you bother purchasing.

Recommended?  *sniggers loudly*  What do you think!?
Email ThisBlogThis!Share to TwitterShare to FacebookShare to Pinterest
Labels: hair, hair removal, skincare