One of the most asked questions from makeup enthusiasts is What is the best dark matte black eyeshadow available.  Not dark brown, not charcoal, not dark grey... black.  "Priests Socks" black, as we call it here in Ireland.  Deepest darkest blackest black.  The kind that really doesn't reflect any light back from it.  Darker than coal black... black as the ace of spades... black... oh, you get the idea.


This has become somewhat of a quest for me, and I've spent considerable time (not to mention cash) researching, purchasing, using... So why not share the results... What I've done here is to swatch all (actually, just "most of") the matte black powder shades I have, ignoring the handful of cream/liquid/mousse formulations, and leaving metallic and/or frosted and/or duochrome blacks aside also; just the matte blacks for now.

All of these, except the second last, are pressed powders (MAC Pigment is loose powder formulation). 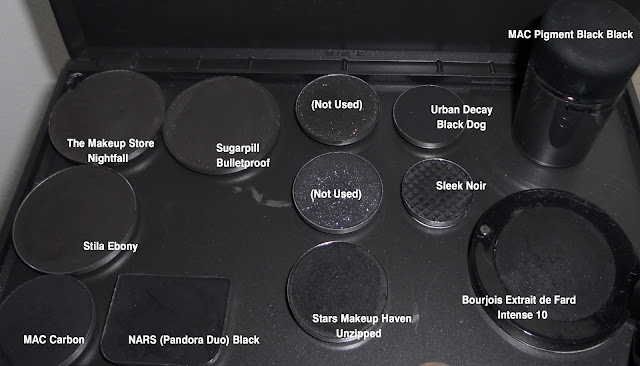 These eyeshadows were photographed in the following order...

~ Applied, using my finger, straight onto my arm, three coats of each (except MAC Carbon which took seven coats and still wasn't getting anywhere quickly):

~ Then gently buffed out with a MAC 217 blending brush:

I next wiped them off and started-out again...

~ Applied, using my finger, onto my arm over two thin layers of MAC Paint Pot in Blackground (also applied using my finger)*.  Two coats of each (MAC Carbon got four coats):

*MAC Blackground isn't the best choice on the planet as there's a slight sparkle to it, however I just wanted to check pigmentation and blendability on top of a black primer/base.

~ Then not-so-gently buffed out with a 217 blending brush:

~ Finally, I also wiped my entire arm a few times with my other hand to simulate a few errant rubs of the eye: 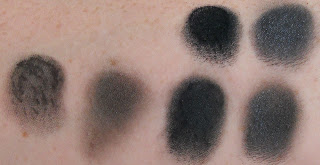 The pigmentation is evident, and as you can see, if you really really want to have an intense black, you need to push the colour on top of a black cream primer.

However once you blend them out, most of them lose most of their intensity.  At this point, Sleek Noir and Bourjois Intense Extrait de Fard #10 look like the best dark black options.

Once we apply a primer however, we see a slight change... MAC Pigment in Black Black, Urban Decay Black Dog, Sleek Noir and Bourjois Intense Extrait de Fard #10 are still quite intense black, but so too is Stars Makeup Haven Unzipped.  Personally I think that Urban Decay Black Dog looks best here.

Primer plus blending gives a different story though...  all of the shades mentioned above (applied on top of primer) still keep their intensity.  Urban Decay Black Dog looked like the clear winner to me.

Incidentally, when cleaning all of these off with a cotton bud and eye makeup remover, the Bourjois Intense Extrait de Fard #10, NARS Pandora duo black, Urban Decay Black Dog and MAC Pigment in Black Black were the toughest to remove, with the others coming away much easier.

Sleek Noir
Felt a little loose, the shadow does give quite a lot of fall-out and takes a bit of effort to blend, a lot of Sleek colours are the same in terms of fall-out and a bit more effort required to blend, but given the price they are well worth it (around €8 or €9 for a 12 colour palette).

Face2 the cool-toned black shade from the Basics palette
I believe this Palette is now discontinued.  The shadow is quite finely milled and easy to use, however the colour is more grey-ish than black.

The Makeup Store Nightfall
Looks a little like a dark charcoal brown in the pan, it is reasonably finely milled and easy to work with, but not particularly intense black.

Sugarpill Bulletproof
This is touted by many as the "ultimate matte black".  I don't see it.  It's a little tougher to blend out than I would have expected, it's not particularly finely milled and it certainly isn't soft, it feels harsh and chalky, although it doesn't look it, on the skin.

Stila Ebony
Reasonably black, but still not dark enough.  OK to work with, soft and blendable.

MAC Carbon
Awful.  The first black I ever got and I never reach for it.  It is bad in terms of pigmentation.  This one took me 7 swatches (at this point I gave up) to get it any way opaque.  It doesn't blend particularly well, it's not particularly finely milled.  Awful across the board.

Urban Decay Black Dog (from The Black Palette)
Reasonably easy to work with but not the easiest to blend out cleanly.  It does have some of the best pigmentation though.

MAC Pigment Black Black
Easy to work with, easy to blend, soft... the only problem that most people have with pigments is the propensity for dropping them or knocking them over and making a horrendously awful mess, ruining your mother's carpet while visiting of a weekend, and having to hide it with a rug**.  This is not a bad option for a matte black, but as far as I know, it's a PRO colour, so not the easiest to get your mitts on.  In addition, you're going to have a large amount of black fall-out on your cheeks when you work with pigments.  That's not a problem, but worth remembering.


<Edit 20 Nov> Makeup Forever #4
Silky soft, easy to blend, but difficult to get a lot of the product packed on (5 coats later with no primer, you can see it was still quite patchy).  Black "enough" but not worth purchasing, there are better matte blacks available.  A pity, I was expecting great things from the Makeup Forever offering.

**I never ever did this

There's a plethora of other "Matte Blacks" out there.  MAC also have Typographic and Nehru, but I find both of these even lighter than Carbon (which is why I didn't bother including them).  Urban Decay also has Perversion and Blackout, the latter is supposedly better to work with than Black Dog, but I don't have it so I can't comment; the former is a "good enough" black but not particularly uber-dark.

In terms of personal preference, I usually reach for either Sleek Noir, Urban Decay Black Dog or MAC Black Black pigment.  Overall best pigmentation?  Probably Urban Decay Black Dog.  Personal preference?  Urban Decay Black Dog (I know that I will have to work with it a bit).  All of this assumes (a) using a black primer underneath to get maximum intensity and (b) doing my foundation afterwards... black makes a mess.  If I were on a budget?  Hands-down, Sleek.  Just make sure you get one of the palettes that have Noir in them (eg the Sleek Good Girl palette doesn't have it but I think most of the other palettes do).

Tips for working with blacks

That was a bit OTT, but it was my first post and I didn’t really know how much information to include!  In the meantime, I now have to clean black shadow from under my fingernails, all over my makeup station and my 217s :-)
Email ThisBlogThis!Share to TwitterShare to FacebookShare to Pinterest
Labels: dupe, makeup
Newer Post Home